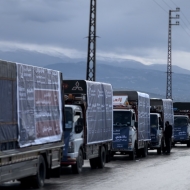 Qatar Charity’s (QC) delegation, which is currently visiting Lebanon, continues to deliver urgent aid to Syrian refugees and underprivileged Lebanese families. This comes as part of the ‘Qatar Relief Convoys’ organized by Qatar Charity within the framework of its ‘Warm Hearts’ winter campaign. The aid aims to meet the winter needs of the beneficiaries by providing shelter kits, food items, and fuel in Arsal, Beqaa, and Akkar of Lebanon. The delegation, headed by Mr. Yousef Fakhroo, CEO’s assistant for the Resources Development and Media sector at Qatar Charity, consists of officials from Qatar Charity, many social activists, and social media influencers, in addition to donors.Syrian Refugees During the visit, the delegation distributed aid to the Syrian refugees in the camps of Akkar in northern Lebanon, which included 225 tent sheets, 300 food packages, and 1500 winter kits, as well as heating materials, benefiting 300 families. The delegation also distributed food packages to 250 families of orphans and the needy, giving gifts to the children of 50 families.In Beqaa, the delegation visited the Syrian refugee camps and distributed 650 food packages, as well as winter kits and fuel, to 382 families in the southern Beqaa camp. The delegation is expected to distribute other assistance in the camps of Arsal. Vocational Training InstituteThe delegation also visited Qatar Charity's projects in Lebanon, including the Vocational Training Institute in Sidon, which contributes to preventing school dropouts. Nearly 1,500 students graduated from the institute in three years. The delegation also inspected the mother sewing workshop and health projects, including the dental clinic rehabilitation project. Mr. Yousef Fakhroo, CEO’s assistant for the Resources Development and Media sector at Qatar Charity, and head of the delegation to Lebanon said, this visit comes to assess the conditions and needs of the Syrian refugees on the ground and deliver the Qatari assistance to the needy through these convoys, stressing the continuation of the convoys in other countries to help the affected.He also noted the refugees’ needs, most of which are personal needs like tent sheets. He indicated that ‘Warm Hearts’, the 2022-2023 winter campaign, aims to deliver aid to more than 1.2 million people, including IDPs, refugees, and underprivileged families, in 15 countries, including Syrian Leboneng, Jordon, Turkey, and Syria.Expressing their happiness with the aid, the beneficiaries said that they were in dire need of such assistance. They thanked the State of Qatar for supporting them in these challenging circumstances. Qatar Charity thanked the donors for supporting the ‘Warm Hearts’ campaign. Thanks to their contributions, the donation for 47 convoys was completed. Qatar Charity urges people to continue their support to reach the target number of 250 convoys to benefit nearly half a million refugees, internally displaced persons (IDPs), and underprivileged families in six countries namely Lebanon, Turkey, Pakistan, Jordan, Syria, and Yemen