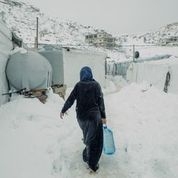 Qatar Charity (QC) has launched the ‘Warmth and Peace’ campaign for the 2021-2022 winter season under the slogan ‘Share the Warmth’. The winter campaign aims to deliver aid, worth nearly 90 million Qatari riyals, to more than 1.4 million people, including the displaced, refugees, and underprivileged families, in 17 Asian, African and European countries.Press Conference The winter campaign was launched in a press conference attended by many Qatar Charity’s officials, including Mr. Ahmad Yousef Fakhroo, CEO's assistant for the Resources Development and Media sector, Mr. Nawaf Abdullah Al Hammadi, CEO's Assistant for International Operations and Programs, and Mr. Abdulaziz Jassim Hejji, director of the Marketing and Digital Growth and Customer Service departments. Speaking and the press conference, Mr. Ahmad Yousef Fakhroo, CEO's assistant for the Resources Development and Media sector at Qatar Charity, extended his sincere thanks and gratitude to the donors, both individuals and companies, and other supporters for backing Qatar Charity’s previous campaign that reached out to millions of the affected in the crisis-stricken areas worldwide. He also thanked the media and social media influencers for playing a significant role in making better known the pressing humanitarian issues.He urged everyone to continue supporting the campaign to reach as many needy people as possible across the world, as the predictions of international organizations indicate that the 2021-2022 winter seasonwill be difficult for the displaced and refugees, especially due to the repercussions of the COVID-19 pandemic. Mr. Fakhro indicated that assistance will be distributed soon in the targeted countries, noting that the campaign will also be implemented in Qatar and workers will receive winterization aid.Aid Distribution Mr. Nawaf Abdullah Al Hammadi, CEO's Assistant for International Operations and Programs at Qatar Charity, said that Qatar Charity will deliver the aid to the expected beneficiaries in the targeted countries through its delegations, field teams, and partners. He also noted that having more than 30 offices globally will make it easy for Qatar Charity to quickly deliver winterization aid to dissevering people. “The current winter campaign aims to extend QAR-88.5-million aid to 1,362,000 people in 16 countries, with a focus on the makeshift camps of the displaced and refugees, and countries experiencing exceptional circumstances or facing a harsh winter with temperatures dropping below zero,” noted Al Hammadi.  “Refugees and the displaced, especially Syrians, and Rohingyas, are among our main focus because they are more vulnerable than others to climatic conditions due to their poor conditions.”Early Support Mr. Abdulaziz Jassim Hejji, director of the Marketing and Digital Growth and Customer Service departments, talked about the reasons for naming ‘Warmth and Peace’, hoping that the campaign would contribute to lessening the plight of the vulnerable, and bringing a safer and warmer to them.He noted the importance of early support for the campaign to avoid many risks facing them, especially in times of severe cold, heavy rains, and snowfall, which are expected within the following months.He touched on the campaign’s main areas and products, which are food, winter supplies, shelter, health, and education, mentioning the ways to donate and the types of donations, including in-kind donations. Targeted CountriesIn addition to the State of Qatar, the targeted countries include Palestine, Pakistan, Bosnia and Herzegovina, Albania, Tunisia, Lebanon, Jordan, Bangladesh, Syria, Kyrgyzstan, Somalia, Morocco, Afghanistan, India, Yemen, and Turkey. The campaign focuses on the displaced, refugees, and the affected in countries suffering from prolonged crises or facing exceptional circumstances. The Syrian displaced persons and refugees, Rohingyas, and the underprivileged of the countries with harsh cold will receive special attention and significant concentration. Campaign’s Products The winter campaign’s products include food packages, warm clothes, blankets, heaters, heating fuel, tents, house rent and maintenance, and personal hygiene kits. Among the campaign’s products are also necessary medicines and medical supplies to protect the underprivileged, the displaced, refugees, and those with chronic diseases. Under the campaign, support is expected to be extended to children and youth education in the areas of asylum and displacement to contribute to ensuring a bright future for them.   In Qatar Qatar Charity, through its ‘Warmth and Peace’ campaign, seeks to deliver assistance to 4000 workers with an estimated value of more than one million riyals. The workers’ service will include warm clothes, blankets, food, and medical checkups and organizing awareness-raising lectures for them. The campaign will also see many public and social events and programs, which will be organized in commercial places to educate people about vulnerable people’s situations in winter. Besides, many awareness-raising events, sports activities, and other interactive competitions will be held in support of the campaign.

Migration in the Middle East

The World Health Organization (WHO)

Misery beyond the war zone:...

Listening to the poor?...

Humanitarian Mine Action: the...