Home All collections Fadel Adamovich: From the suffering of orphanhood to the holding a prestigious position 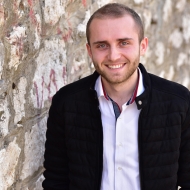 Fadel Adamovich: From the suffering of orphanhood to the holding a prestigious position

Fadel Adamovich is a Bosnian youth, who grew up as an orphan. When he was only 24 years old, he managed to occupy a high professional position at a prestigious institution. Fadel became an orphan at the age of 1, thus he lived under the difficult conditions, away from his hometown of Srebrenica, which witnessed the genocide that claimed the lives of thousands, including his father, may Allah have mercy on him.Beautiful DreamFadel graduated from the Faculty of Electrical and Electronic Engineering. Currently, he is holding two significant posts at the Sarajevo Film Festival (SFF), which has become one of the most important festivals of the seventh art in South-Eastern Europe since it was launched in 1995. Moreover, he is engaged in various volunteer activities in addition to having many ambitions in scientific and professional fields.What are the most important factors that helped Fadel achieve his successes, and what is his most noteworthy dream for future?After the Srebrenica massacre, also known as the Srebrenica genocide, in 1995, his mother had to travel with her little and only son to Sarajevo for safety. She tried hard to surround him with an atmosphere of care, love and support in order to not let him feel the loss of his father. All she wanted is to see her son as a good and successful person. For this reason, she decided to work and made sacrifices.Allah, the Almighty has bestowed his blessings upon the mother. Her son was granted sponsorship by Qatar Charity. The financial aid had constantly been given to her mother by the charity until he became a youth. The aid helped his mother meet their basic living needs and contributed to providing an atmosphere that supported him in the concentration on his studies. This resulted in his academic excellence, enabling him to enter the Faculty of Engineering, which accepts only brilliant and hard-working students.   Fadel, as an EngineerIn 2016, Fadel graduated with excellent marks from the College of Engineering. Then, he was hired by an organization that oversees the management of the Sarajevo Film Festival (SFF) held annually in his country, which is one the most significant cultural events in Europe.Fadel holds two positions at the organization where he is an information system project manager, and works on developing the festival's information system to make the best use of the system. Also, he is in charge of the Transportation and Housing Department, and he benefits from his engineering capabilities and background to provide better services to guests attending the festival.Ambitious FadhelFadhel is a model of ambition, determination, perseverance and mastery in his affairs. Besides his work, he continues his higher education in engineering. He is currently focusing on two things. First, he wants to complete his master's degree and improve himself professionally. Second, he does his utmost to make the next edition of the film festival better than the previous ones."Working at the Sarajevo Film Festival is an appreciation and gratitude to me, because it means that my work, talents, and efforts are becoming known, given that the festival enjoys the presence of spectators, not only from Bosnia and Europe, but also from across the globe", Fadel says.An Attempt to Return the FavorVolunteering occupies an important place in the life of Fadel. He is an active member of a student charitable association, which provides assistance to needy families and organizes awareness activities for children.Fadel is deeply grateful to his mother. He knows that he can not return the favor to her mother. Therefore, he considers all the successes he achieved or will accomplish in the future is only an attempt to return the favor to her mother for her tremendous sacrifices that she made for her only son. He also extends his heartiest thanks to sponsors who supported him with the monthly financial aid, which helped him concentrate on his study and achieve successes. Fadel’s Tips for ChildrenFadel advises children to obey parents and to seek their satisfaction in general. However, he advises orphans to be dutiful to their mother in particular, as she plays the role of both parents; father and mother at the same time. Moreover, he recommends them to trust in Allah, because a strong faith in Him helps overcome all the challenges of life.Additionally, he gives advice to children and youth to work hard in order to be successful in their lives. He also advises them to choose the fields of study and work that they like and give better and effective performance, both academically and professionally. Join us to make more success storiesThis story would not have been written if there was no support from benefactors for a hero (beneficiary) who patiently faced the challenges of orphanhood, poverty, disability or suffering.The opportunity is still available through Qatar Charity to make more success stortries with your contribution and support.

Through its initiative, Rofaka: Qatar Charity launches "I’m not just a number” campaign